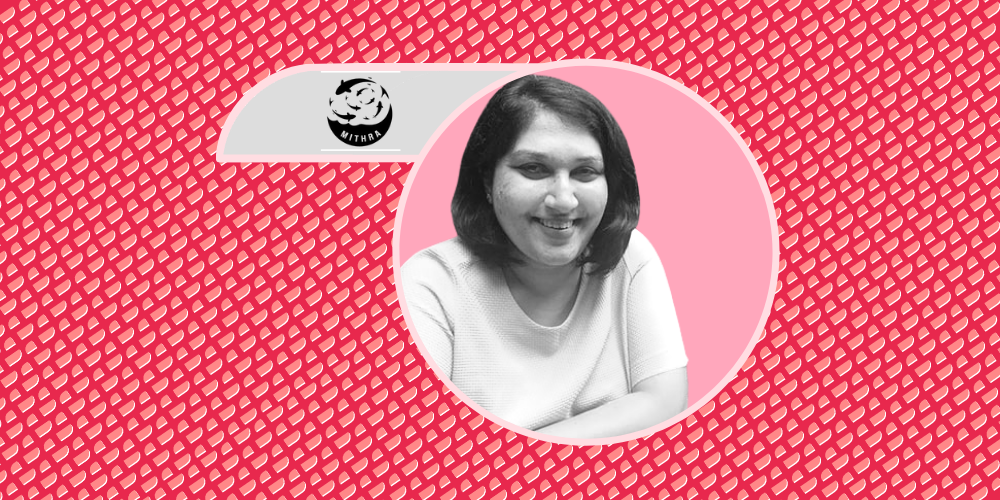 Bhairavi Prakash's Mithra Trust is a social impact organisation that’s innovating its way through the mental wellbeing space in India.

When you’re in the midst of a harrowing mental health spiral—sometimes all you may hope for is a friend (yourself included)—and Mithra (friend in Sanskrit) was built on the premise of that hope. Founded by a badass woman—Bhairavi Prakash—Mithra Trust is a social impact organisation that’s innovating its way through the mental health / well-being space in India. Its vision is to build safe spaces of understanding, empathy, and connectedness, one trustworthy friend at a time.

Mithra’s raison d'être is to demystify mental health information in a way quite like a trusted friend would. Having experienced depressive episodes herself—which went undiagnosed until her mid 20s—Bhairavi, a professional psychologist—encountered some of the barriers in reaching out for reliable help. She perceived an urgent need to curate information and resources that were accessible, unintimidating, engaging and reasonable to afford. And so she launched Mithra Trust in Sepetmber of 2018 on World Suicide Prevention Day—a day that hit her close to home—as she’d lost her high school friend to suicide. With a personal loss and an awareness of how prevalent student suicides are in India (one of the highest in the world)—her team and she resolved to create a community that would enable young people to support each other. She inaugurated her platform with the first in her series of “what to say to someone who is talking about taking their own lives ”.

The organisation engages students, student networks, and youth communities on positive mental health by providing information, workshops, tools, and services. Unlike traditional mental health organisations, Mithra Trust does not provide therapy services but instead seeks to leverage the power of frameworks, tools, social media and self-help products to:

Products and services that help heal..

How they operationalise this vision is based on their products and services, which try to further a more authentic and accepting engagement with one’s emotions. They also try to equip their communities and their support systems with tools for validating deep-seated vulnerabilities.

First up is ‘The Meh Kit’—India's first self-discovery tool. ‘The Meh’ is a term that Bhairavi had conceptualised to communicate her mental health woes with her family. The term is a simple way to articulate ‘not being okay’—it could mean feeling overwhelming thoughts/emotions, or feeling disconnected, numb and bored. The Kit contains thoughtful stickers, cards on perceptions about depressions, personalised letters from the founders, and a host of tools to ride out the ‘Meh’, among others. The tool has been immensely useful in the recovery journeys of survivors of gender-based violence.

Second, the team hosts the ‘Understanding The Meh’ workshop for colleges and corporates. Third, the ‘Invisible Visible’ is a discussion forum where people come together and talk about sadness, loneliness, and the 'Meh'. Fourth, the team has conceptualised a brilliant series on 'what to say' which underscores the power of verbal support in a journey towards recovery. The series serve as ready recockners on how one can be supportive during difficult conversations—grief, anxiety attacks, overthinking, caregiving, suicides, sexual assault, and much more. Fifth, Mithra also runs a series called ‘The Meh & Me’ where men are asked to submit their stories of when they are not okay, to challenge the stereotype of what it means to be a man. During the lockdown, they also offered free weekly ‘meh’ sessions where they discussed doodles that depicted depression and anxiety.

Mithra Trust is a unique brand whose deepest legacy is in innovating how mental health is spoken of. It operationalises ‘safe spaces’ and moves the needle on difficult conversations. A few other reasons that sets this organisation apart are:

In Mithra we trust…

True to its name, Mithra Trust is an organisation that is warm, accepting, nourishing, kind and safe. Their logo—a pod of Koi Fish—represents how we are separate in our own journeys—yet together we share a sense of belonging and connectedness. In Bhairavi’s own words her greatest sense of achievement: “are the stories that are shared which just hit me in the feels immediately, it is all heart and soul :)”. For its tremendous integrity and intent—Mithra Trust is an organisation—a friend—an emotion—that we wholeheartedly  trust.