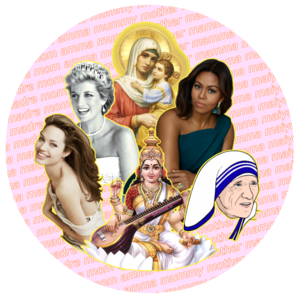 A list of badass mothers, who are refuse to conform to the norms of society.
Team Bebadass

Motherhood as we know it does not begin when you hold your baby for the first time. It is the nurturing essence present in all humans and animals and the criteria for its existence is not the presence of a blood/bond related fetus. Being a mother has less to do with your gender or genitals and more to do with the relentless selflessness and affection. You should understand that motherly instincts exist in each of us no matter how dormant or no matter in what capacity, and so it only makes sense that not everybody can pursue the same conventional path towards the maternal glory.

Today we dedicate our respect to those badass souls who have chosen to tread a niche path to become the unconventional madre.

Jane Goodall is a name well known to be associated with unconditional nurturing towards wildlife. As an animal rights activist he dedicated over 50 years of her life to taking care of and protecting wild chimpanzees first in Africa and then all over the world. As a child, as an alternative to a teddy bear her father gave Goodall a stuffed chimpanzee named Jubilee, and she has said her fondness for this figure started her early love of animals. Today she travels the world, speaking about the threats facing chimpanzees and environmental crises, urging each of us to take action on behalf of all living things and planet we share. The recipient of numerous honours, she was named a UN Messenger of Peace in 2002 and was later created Dame Commander of the Order of the British Empire (DBE) in 2003.

“I am there for all those who have no one” - says  Sindhutai Sapkal, who by the age of 12 was married to a 30 year old man and by 20,bore 3 sons. Even at that time she was a woman of conviction who fought against the exploitation of villagers at the hands of a local strongman. When her agitation garnered the support of the district collector, the local strongman convinced her husband to abandon her. After being shunned by her husband, villagers, and her parents, Sindhutai after managing to survive her dreaded situation, dedicated her entire life to orphans, who lovingly call her aai. Her orphanages are backed by private donations. Unlike other orphanages, Sindhutai’s orphanages don’t ask their wards to leave after the age of 18, instead they can stay till they get jobs, get married and settle down. Many years after being abandoned by her husband, he came back to her and apologized for his harsh deeds. Sindhutai forgave him, accepted him as her child and she fondly introduces her 80-year old husband as the eldest child.

In her 40 years of continuous social Work, she has received more than 750 awards. She is a mother to around 1400 orphaned children, 207 sons-in-law, 36 daughters-in-law. The number of lives she has impacted is inspirational, beyond humbling and represents the pinnacle of humanity and motherhood.

Sure everybody knows and appreciates the fact that she adopted two girls and is doing a phenomenal job of raising them into wonderful ladies. But why we think she needs more credit for what she did is because adoption in India still majorly remains a means to a resolve an issue associated with conception. Most people still think of adoption only and only if they have been let down by their biologies and even then it is a taboo. The fact that Sushmita Sen adopted as a single parent not once but twice, not because she had to but only because she wanted to, really is an exemplary act for this country.

Since a very young age, Sunitha knew her calling was to serve society. During one of her social endeavours of educating children, she was gangraped, beaten and left partially dead in one ear by a group of eight inhuman “men”.

Furious and disappointed by the aftermath of the incident, Sunitha said, “What affected me more was the way society treated me, the way people looked at me. Nobody questioned why those guys did it. They questioned why I went there, why my parents gave me freedom. And I realized that what happened to me was a one-time thing. But for many people it was a daily thing.”

Armed with a purpose, an undying fight and a lot of courage, Sunitha has since then dedicated her life to fighting sex trafficking. She co-founded an organisation called “Prajwala” (meaning undying flame) in 1996 in South India. Prajwala works towards Prevention, Protection, Rescue, Rehabilitation and Reintegration. In the last one decade it has become one of the most powerful voices nationally and globally for ensuring holistic victim services.

Now known as Archarya Maha Mandaleshwar, Laxmi  of Kinnar Akhada is a well known Kinnar/hijra social activist. She was the first transgender person to represent Asia-Pacific in the UN President’s Office Civil Society Task Force on HIV/AIDS. Laxmi’s aim is to bring about the recognition of human rights of sexual minorities, especially transgender persons, and people living with HIV/AIDS. She was impleader in the recent path breaking Supreme Court case of India and subsequent judgement on upholding rights of hijras and transgenders in India.  Laxmi is also the Founder and Co-Founder member of Maharashtra Trithiya Panthi Sangatana – MTPS and APTN – Asia Pacific Transgender Network, respectively.

Having spent her childhood during the independence movement, Ela grew up to be an idealist whose vision was to build a just society. After completing her law degree, Ela joined the legal department of the Textile Labour Association (TLA), (India’s oldest trade union). It was through her work at TLA, that Ela realized the harsh truth of the unorganised labour force in the country.

Ela founded SEWA in 1972 to organise women workers for full employment which includes work security, income security, food security and social security. Under Ela’s leadership, SEWA established a cooperative bank to provide small loans to poor women to start their own businesses. The union also provided financial and business counselling. Further in 1979, Ela co-founded the Women’s World Banking (WWB) which is a global network of microfinance organizations that assist poor women. Through her roles as the chairperson of the National Commission on Self-Employed Women and advisor to the World Bank, Ela continued to work on matters relating to microfinance, banking, and antipoverty programs.

She is a a globally renowned social activist, a member of the Elders (a group of world leaders that was founded by Nelson Mandela to promote human rights and peace) and has a won a number of awards including the Padma Shri (1985) and Padma Bhushan (1986) for tireless efforts and accomplishments in elevating the labours in Indian textile industry.

“The best time to plant a tree is 20 years ago, the second best time is now”.  - reads the presentation of Plantology India, a self funded organisation formulated with the aim of increasing the green cover in India.

The brains behind this brilliant initiative is Radhika Anand, a 52 year old woman based out of Delhi who has planted more than 1,85,000 saplings. In partnership with the Indian Army, Radhika has planted saplings of mango, blackberry, tamarind, and jackfruit trees across north India, primarily in the states of Maharashtra and Rajasthan. Radhika’s passion for the environment stems from her childhood years of living in the Cantonment greens with her parents. Plantology FALVAN’s mission aims to plant 50,000 fruit trees every year in order to create more green cover and oxygen for future generations as well as to provide food for all species existing on Earth. For being an unselfish trustee, a guardian of the future generations and for mothering mother nature, Radhika Anand has our respect.