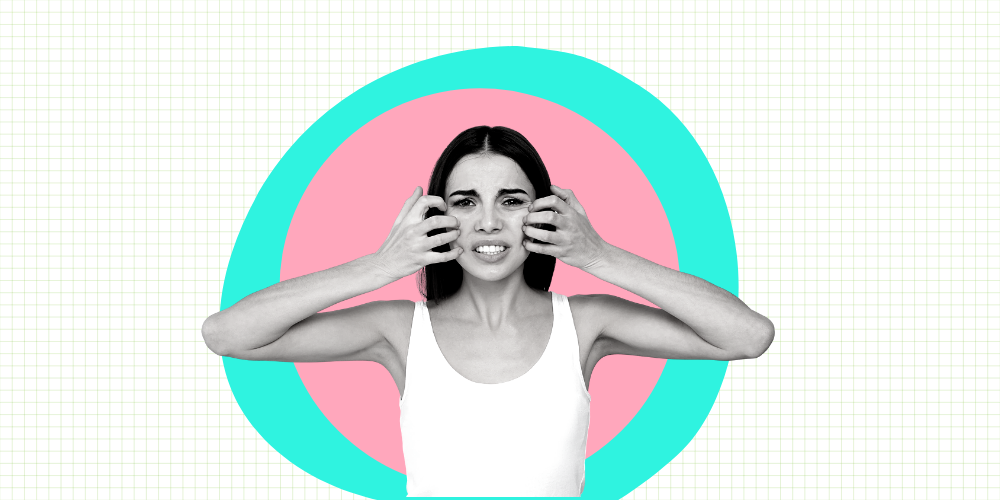 Skin conditions can severely affect women's mental health and self-image. We spoke to 9 extraordinary women about their experiences.
SIMRAN VARMA

Over the past few years, our innate bias towards fair skin has largely been challenged and in some cases, brought about certain changes, even if they remain largely performative in nature (For example, the demand for fair skin has now been replaced with a demand for glowing skin). However, a phenomenon that remains unexplored by mainstream media and in some cases, dermatological research is that of skin conditions and their negative impact on women’s mental health. Millions of women across the world are affected by various skin conditions that mostly go undiagnosed due to the lack of discussions around them. Skin conditions can emerge due to genetic or hormonal conditions. Some of these conditions are symptoms of larger issues in our bodies. The most common symptoms of these conditions are darkening or peeling of skin, rashes, change in texture and irregular growth of body hair. While most skin conditions are considered medically harmless, there has been a considerable number of studies to prove that they greatly affect how we view our bodies and have become a big source of our insecurities.

We spoke to 9 extraordinary women regarding their experience with different skin conditions:

“I have a condition called Cheilitis exfoliative, it’s a rare one. It’s been affecting my lips for 2 years now. I can’t eat properly and it’s been so long since I have given up salon and cleanups, facials.  Every once in a while, my anxiety makes it horrible. Haven’t use lipstick since months- I hate this condition”- @Tasleem Nissa

“It’s a skin disorder due to which our skin looks like fish scales. It is hereditary and hence, can’t be cured, also there is no medication for the same. If we  were inheriting this from either one of our parents, it’ll be on our legs, hands etc but we inherit it from both- it can turn out to be extremely serious, causing painful itching and constant dryness.” - @go_ff_iii

“I have something called the fish skin disorder, which makes my skin look scaly. Currently, this condition only affects my legs but I still feel extremely conscious while wearing shorts or dresses and even though I love shorts and dresses, I generally avoid wearing them"- @aditis_

“So, I have abscesses. The cause of them is MRSA. I’ve had them on my neck and various body parts. They did make me loathe myself in the beginning when I had to go in front of others with large red bumpy pus balls but then I realized how the pain they caused would kill me; how others couldn’t feel my pain for me so I stopped giving a fuck about them. Now I am loving myself stronger than ever” - @Hurraida

“I have hyperpigmentation so when I look at myself in pictures, it doesn’t look any different but in reality, you can clearly see the condition. I feel like I am cheating everyone around by not showing it. It makes me feel ugly. I know there are others who have way worse skin conditions than mine- this is just a dark patch on my chin but still” -anonymous

“I’ve had eczema since birth and I was told that it will go away around the age of 11. I’m 19 now and it gets worse and worse. People have told me that I look like a dalmatian with my spots and laugh at me. Synthetic material makes my eczema worse and the hand sanitiser burns and also worsens it. At one stage in 2020, I could not bend my fingers due to eczema and sanitiser. Honestly, it’s very restricting and I feel like can’t do everything that the people around me can.” - @zantebensch

“I have atopic dermatitis which makes my scars and scratch marks all over your limbs. Sometimes, I feel so bad for myself, thinking I wouldn’t be attractive and my sex life would be a disaster- he would think I am disgusting etc. I blame god, there are many low moments- but at the end of the day, I get over it. I know it’s just skin and I am much more than that I can’t do anything about it. I have to let it go and focus on things that really matter. If it doesn’t bother me, it’s not going to bother the person I love.” - @annadianajohn

“I had KP when I was a teenager. I used to get red bumps on my upper arms and it created very patchy and bumpy skin. I could never wear sleeveless or short sleeves because some of the other people would point it out. It was super frustrating. I visited a few doctors but instead of asking me to stop waxing, they gave me expensive creams and gels saying it’s acne. After a while, I stopped caring. One of my cousin who was doing her MD in dermatology asked me to stop waxing. I am 30 now and it’s been 8-9 years since I stopped waxing. Now my skin is smooth. I read KP goes away on its own by the time you turn 30. I know it’s not a major skin condition but for a 16-year-old with a dark complexion- it was.”- @Gauri06

“Well, I've had acanthosis nigricans for as long as I can remember. Nobody has commented on that, but I do feel it had stopped me from being myself. I cannot wear sleeveless, can't wear any neckpieces and so on. With hirsutism, it has been quite embarrassing. I've had kids just touch my face and go like ' oh you have a beard' and you know some small comments. Acne has been a terror during my teenage years. All of this is due to my obesity and PCOS. I wish people would stop telling me to lose weight or make snide remarks or subtle comments. They have no idea how much I resist having junk and so many other things. Having tea without sugar. C'mon Indian chai without sugar? I went so hard on myself that it actually made it all even worse. I wish people would stop telling me things I already know. If it only were that easy for me.” -@madhuris22

HOW CAN FRIENDS AND FAMILY SUPPORT GIRLS STRUGGLING WITH SKIN CONDITIONS?

Women with skin conditions have often spent hours/days trying to learn about their condition. They know more about their bodies than you ever would- unless you’re a certified dermatologist, back off. Stop asking women to lose weight or change their diets, it’s not your place.

Sometimes, the best way to support people with ANY condition is to put your curiosity aside and let them be. Don’t ask or assume anything about their condition. If they feel comfortable, or want to talk about it- they will open up to you anyway. Skin conditions are a small part of a woman’s life and yet, too often, we are made to feel so small because of them.

Skin conditions are not harmless if they impact our mental health- don’t joke or make snide comments about them. You have no idea what the other person is going through. Your words can’t solve their conditions but can aggravate their insecurities.

Too often, women feel alienated and isolated from social groups because of these skin conditions. This is owed to awful and obviously, incorrect assumptions made about them. The onus of unlearning these misconstrued assumptions is not on the person struggling with them but on YOU. Don’t allow people to stigmatize these conditions. Small acts of resistance, like asking a family member or a friend to stop discussing someone’s condition, is how you can help women with skin conditions.